The cryptocurrency market has been experiencing lows in recent times, with the economy facing rising inflation and recession concerns that discourages investors. Bitcoin and other crypto markets continue on a downward trend, making the public worried that this is the end of crypto. But to give some perspective to this phenomenon, this is not new. This crypto slowdown actually happened back in 2018.

Back when the general public started hearing about the skyrocketing value of crypto, Bitcoin reached a peak of over $19,000 in December 2017. But with news of coin exchange hackings in Japan and Korea, as well as the cautionary stance and pessimistic crypto comments of governments and some of the major figures in the financial and investing world, people started panicking and selling due to the fear of losing money.

In 2020, everything was halted, the economy started to get bleak during the coronavirus pandemic, and there was inflationary pressure towards fiat money. Even with the economy at a standstill, people are motivated to turn to Bitcoin and other cryptocurrencies. The growth of Decentralized Finance (DeFi) companies and Decentralized Autonomous Organizations also attracted the public to invest in crypto during these times.

But like in any market, what comes up must come down. Since 2021’s $68,000 high, Bitcoin has declined to as low as $19,000 level so far this summer of 2022. This was mostly attributed to the inflation and recession concerns, as well as the failure and death of some DeFi companies that have unstable foundations built upon pretenses and ponzi schemes.

Looking at both the crypto slowdown in 2018 and now, we see the same pattern of big claims carelessly thrown around such as “market crash”, “collapse” and “bear market”. These statements are based on fear and breeds more fear for the regular investor, regardless of the reason.

We see crypto and all other markets go up and down – and it will not stay down. The crypto bear market in 2018 only proved the resilience of cryptocurrencies despite it being a new technology. It may fall back for a time, but will continue to spring up. It rewards the investors who are in it for the long-term.

DeFi companies might have carried crypto out of doom after its rally in 2020, but it won’t likely be the case moving forward. In a market slowdown, we begin to see unstable crypto and DeFi firms, initial coin offerings and tokens, and how they die. Only crypto firms that show strength and adaptability can ride out the market volatility.

Indeed, uncertainties still persist in current economic conditions, and the public veers away from investing in volatile markets such as the stock market and cryptocurrencies. No one knows how long and how high consumer prices are still going to go up, how long the Russian-Ukranian war is going to stretch, and if there is really a recession coming. But what we do know is that crypto has shown resiliency, and this is a sign that it’s here to stay given the stable mass adoption and various use cases of crypto and blockchain even in real-world applications.

These real-world uses of crypto may present some growth, but not as dramatic as the wild ride of high and lows in its early days. Individuals and companies who understand this are better prepared to weather the tides of crypto markets. The integration of crypto into the real world will cement cryptocurrencies and Bitcoin as an important part of a technologically advanced future.

Bitcoin Trend is in the ‘Halving’

Given that Bitcoin’s trading volumes is equivalent to 70% of the total crypto trading, we need to understand Bitcoin’s “halving” event, which plays a major role in the rise and fall trend of crypto.

The halving is when the reward for mining Bitcoin transactions is cut in half. This also cuts in half Bitcoin’s inflation rate and the rate at which new bitcoins enter circulation. With limiting bitcoin supply, making it scarce, the demand goes up as more investors enter the market, therefore pushing the prices up. That is why we usually see an uptrend and peak in Bitcoin – and subsequently in other cryptos – after a halving event which happens around every 4 years.

Ever since Bitcoin’s inception in 2009, the halving events every 4 years in 2012, 2016 and 2020 result in Bitcoin price hikes months to a year after it happened. This is followed by a slump, 2 years after the halving event.

Historically speaking, no matter the real-world economic reason, there is a clear trend of rise, peak and slowdown, and the repeating of the cycle again every four years attuned with the bitcoin halving. Previous halving events in 2016 and 2020 showed dramatic increase in Bitcoin and crypto prices stretching for more than a year up to 2017 and 2021. This is followed by a slump in the second year after halving, which happened in 2018 and 2022. The cycle will then reset on the next halving. The next halving event is in 2024.

Halving events will continue to take place until the reward for miners reach 0 bitcoin. The last bitcoin to be mined into existence is expected to be mined in the year 2140. It will be the 21 millionth bitcoin to come into existence and the last – after which, Bitcoin will be deflationary since it is impossible to print or mine new bitcoins thereafter.

Being coded as deflationary, Bitcoin is the opposite of money. Money is inflationary – always being printed and its value deflates over time. With halving, bitcoin production or mining is slowing until there is no new bitcoin created. This is why many bitcoin and crypto believers holds on to their crypto assets (also known in the community as “hodling”) as they see its continuity and long term scarcity value beyond its short-term price volatility.

A lot of the fear in the blockchain world right now is generated by unfamiliarity with the last time the market saw a dramatic downswing in 2018. Because cryptocurrencies are still so new and the number of users has grown so quickly, most of the current investors weren’t around for the 2018 bear market. However, we’ve already learned in the past that a bear market can help clear out a lot of companies built on poor foundations and make way for new innovations and growth.

If you’re interested in being one of the companies that builds a strong Web3 foundation in 2022, reach out to Gigster. We can discuss your current needs and assemble a team of blockchain developers specific to your project. 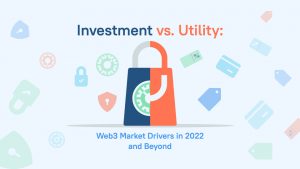 Investment vs Utility: Web3 Market Drivers in 2022 and Beyond

Now that crypto is entering another bear market, people are gradually seeing and appreciating blockchain technology for what it really is, and how it can help our economy and society. 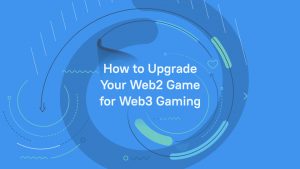